This weekend I took on the task of building a new computer to run all my home entertainment needs. I decided on a small form factor to try and blend to my existing entertainment equipment. With some recommendations from friends, I ended up with the following components:

It was a tight fit attempting to squeeze everything in the case, but once I got the cables routed out of the way of the fans, it wasn’t too bad. I did realize that I couldn’t use the 1TB 3.5” drive because the motherboard only had two SATA ports. Not a big deal, that is why I built a storage server. 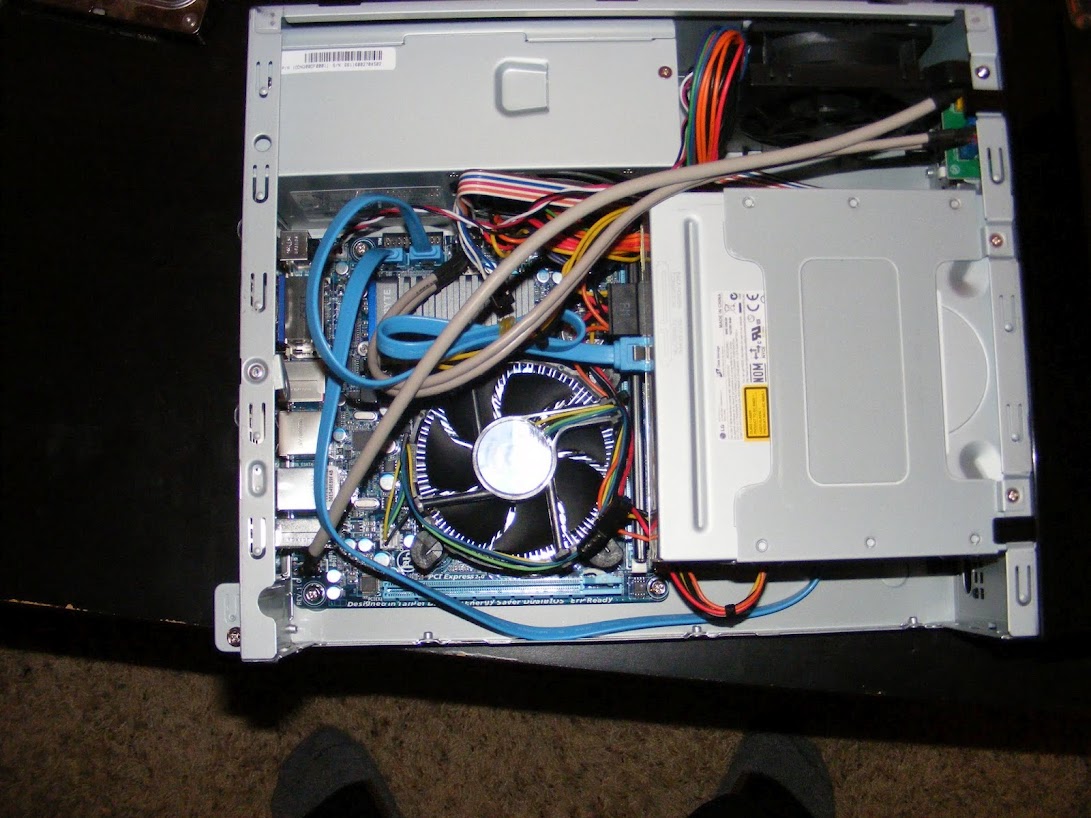 Once everything was in place I fired it up and it ran well right away. I hooked it right up to my TV over HDMI and was ready to install an OS.

I decided to go with OS X; compatibility was a major factor in what hardware I chose. The intel HD 3000 graphics worked great right out of the box and enabled this machine to run without a separate video card. I still have a PCIe x16 slot, though, if I ever change my mind or want to put in a tuner card or something. There is also widespread support for things like Netflix, Hulu, and any major network owned website to play content from. I chose OS X to play content from these websites because  Flash or Silverlight are required, which can be hard to get working on a Linux machine, a Boxee Box or a Roku.

I loaded up the machine with OS X Lion and was off watching Netflix and Hulu in no time. I mounted my storage server and set up Plex I think this will do really nicely as a replacement for my PS3 as a media center. With just a web browser and one app I already have more support for media than my PS3 ever did.

The only hurdle I have yet to figure out is how to play Blue Ray movies on this thing. The drive works great, and will even burn Blue Ray disks, however movie playback is a no go. I found that the new version of VLC has Blue Ray playback, but I have been unable to sort through the quagmire that is AACS content encryption. This essentially means that I can’t access any of the legitimate content I have on this new machine.  I will keep searching for a player that will work, but as of right now I can’t find anything on OS X, paid or open source, that does the job. I am not worried about it though, I have my trusty old PS3 if I need to fall back on it for Blue Ray disks.

The only missing piece right now is a remote. I have a wired keyboard and a RF mouse hooked up that work ok, but are quite clunky to keep on the coffee table all the time. I am going to experiment with hooking up my PS3 remote since it’s bluetooth. However I will have to wait until I get a bluetooth adapter, which I should have soon.

After using this setup I can’t believe I haven’t done this sooner. It’s really quite nice to be able to watch any content you want, as well as browse the web all from the comfort of the couch. I think this will replace my Dish Network nicely.